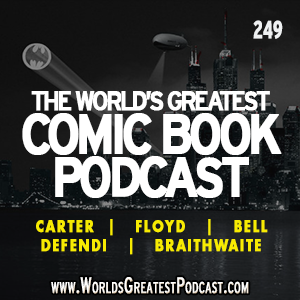 The World's Greatest Comic Book Podcast
249 - Without a Stutter

This week on The World’s Greatest Comic Book Podcast™: Stan Lee cancels a weekend con appearance. Thor Ragnarok has new photos. Marvel will advertise comics in movie theaters and television. The 100 has been renewed for a 5th season. Preacher will return in June. CBS will run  Training Day on Saturday nights. Riverdale has been renewed for a 2nd season. Patrick Stewart is down to play Professor X on Legion. And Buffy turns 20! In comics: America doesn’t live up to its hype, but a new James Bond story is worth picking up. We have Game Chat! We’ll also tell you how you can find us at FanX and how YOU can be a part of our 250th episode!