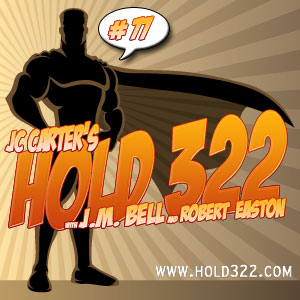 This week on Hold 322! Millar delivers again with his latest epic, Jupiter’s Legacy. I, Vampire finally comes to an end as does Before Watchmen. Both end with a whimper. Miles Morales says: “Ultimate Spider-Man No More!” Guardians of the Galaxy continues their epic, and speaking of epic, there are at least three ways the world could end in four different Avengers comics… IDW becomes a corporate sponsor of the CBLDF and to celebrate Mars Attacks attacks Judge Dredd, Powers is getting a series, Quicksilver and the Scarlett Witch will be in Avengers 2, and the Siegel court battle is finally over? And Thom got his prize pack.

All this, and Bob’s  SYCOPHANTIC INTERVIEW of the Week! Face front, true believers! It’s Hold 322!