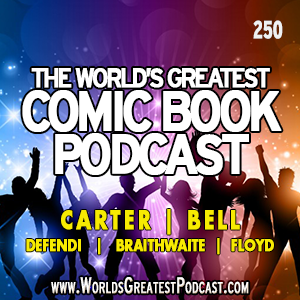 Face front, true believers! It’s the 250th episode of The World’s Greatest Comic Book Podcast™! This week: Matrix is getting a reboot. Batfleck just got out of rehab. Georgia is adding a 10% tax credit to make movies and television there. And we say goodbye to Bernie Wrightson. In TV: Legion is renewed for another season! The NEW MST3K has come to Netflix! And New York TV series are heading back to California to get a tax credit. X-Men Resurrxion has trailers from Marvel that give JC pains. We also went to Salt Lake Comic Con FanX, and have interviews and audio for you, dear listener!