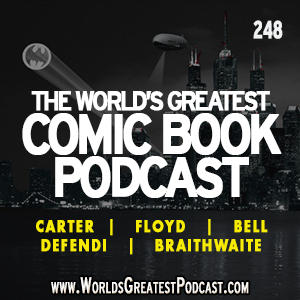 This week on The World’s GREATEST Comic Book Podcast™: we say goodbye to the great Bill Paxton. Batarangs and Mjolnirs that may just fit Jeff’s hands. Hayao Miyazaki officially comes out of retirement… again. Matt Reeves is on board to direct The Batman. Joe Carnahan has been tapped to direct the X-Force movie. In TV: American Gods premieres April 30th. Top Gear got rid of Evans. The new MST3K premiers April 14! In Comics: we’re all playing “catch up” but have some insights on comics you can still find on the shelves. On Game Chat Jeff complains about Two Dots.