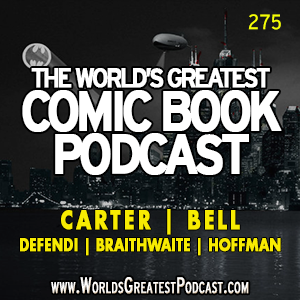 This week on The World’s Greatest Comic Book Podcast™: Huge shake-ups at Marvel Comics, with the exit of Axel Alonso as EiC, and Bendis signing on exclusively with DC Comics. Daisy Ridley and Josh Gad will be Super-Normal. Tolkien’s son resigns as the director of the Tolkien estate. Asher Angel has been cast as Billy Batson to Zachari Levi’s Shazam. On TV: Amazon made a multi-season commitment to The Lord of the Rings TV series. Wentworth Miller exits Flash and Legends of Tomorrow.  George Clooney will star and direct Catch-22 as a limited series. Greg Berlanti is doing damage control after Kreisberg was accused of sexual harassment.