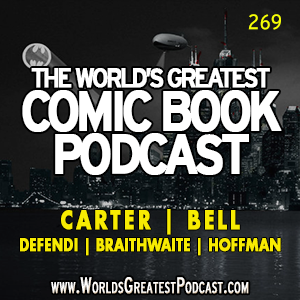 This week on The World’s Greatest Comic Book Podcast™: We review the new Tomb Raider trailer. Quentin Tarantino said he’s down for directing a Star Trek movie. Matthew Vaughn isn’t happy with his studio’s marketing department. Linda Hamilton and Jamie Lee Curtis are going back to their first franchises. On TV: Californian’s had their TV broadcasts interrupted by a weird emergency message. We have the Punisher series trailer. HBO is putting Damon Lindelof in charge of their Watchmen series. We also have comics and a follow-up report from Salt Lake Comic Con!