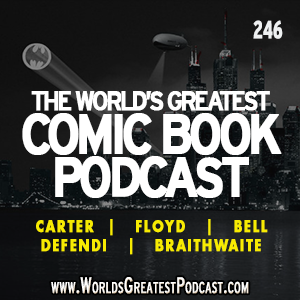 This week on The World’s Greatest Comic Book Podcast™: Ben Affleck is stepping down as the director of The Batman. “Big Brother” has removed Animal Farm from a school’s curriculum. DC continues its take on Hana-Barbera characters with its send-up of Snagglepuss. GLAAD has nominated 10 comics for this year’s Media Awards. And Vault Comics will launch with Natasha Alterici’s Heathen.  On TV: Kristen Stewart dropped the F-Bomb on SNL. Peter Capaldi is stepping down as Doctor Who. S.W.A.T. is returning to TV. And Berlanti is bringing Black Lightning home to the CW. In Comics, we can finally review Mighty Captain Marvel #1 and Angel #1. We’re asked: “why can you wear a sports team jersey but I can’t wear a Star Trek shirt?”