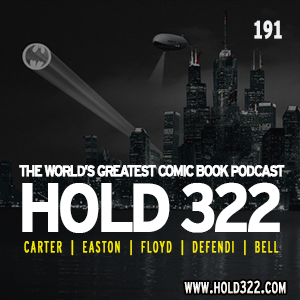 This week on the World’s Greatest Comic Book Podcast™: With the Bobs and the Mighty Thom each on their own solo adventures this week, it was the perfect time to welcome back an old friend, Salt City Strangers‘ own Hoffmangler: Chris Hoffman, and, after a long absence, the Seattle Siren herself: Holly Braithwaite RETURNS! We’ve got the terrible, like Cable joining the Avengers and the Jem and the Holograms movie. We’ve got the great, like Spectre and Guilermo Del Toro’s Jack Kirby Tribute. We’ve got TV news and reviews! JC reviews 4 first issues out from Marvel this week… 2 were “meh”, one was “OK”, and one was great! With no Bob in the studio to ask a question, Chris updated us on Salt City Strangers #4 and gave us some great indy comic reviews. Holly told us about Kelly Thompson, Jem and the Holograms, and some great comics as well!

All this and a Star Trek musical? Face front, true believers! It’s Hold 322!