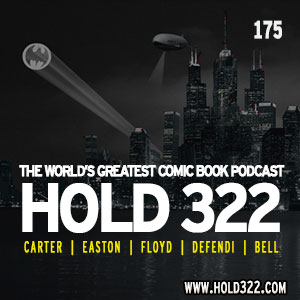 This week on the World’s Greatest Comic Book Podcast! We’re on remote for our 175th issue! Podcasting LIVE* from the balcony of the Sugarhouse Barnes & Noble for DC Comics Days! We’re even joined on the mic by Podcast Phil, an award winning comedienne and our own Alpha Intern! We discuss the new Shannara Chronicles, Ash Vs. Evil Dead, Grant Morrison is the new EiC for Heavy Metal, Elektra is coming to Daredevil 2, Ben Affleck will direct his own Batman film, and Marvel stole our idea! In comics, we talk about the all new Archie #1 by Mark Waid and Fionna Staples as well as 1872 #1 from Marvel. Bob asks Ultimate Stan to sing for his supper once again!

All this and how Kevin Smith got screwed by Star Wars at San Diego Comic-Con! Face front, true believers! It’s Hold 322!

* we weren’t in the studio.