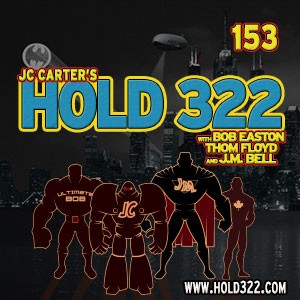 This week on Hold 322… We’re joined by Hello Sweetie Podcast‘s own Kristal Starr, for our Girls of Geek series! Marvel and DC are both running events this year that will reboot their respective universes. Stan Lee and other Marvel veterans react to the news. DC says “Don’t Comment.” Ryan Reynolds is out, so Tyrese Gibson may be in as Green Lantern. Sansa Stark is your new Jean Grey and Supergirl has been found! In comic books, it’s date night for Buffy and the gang, we have a turning point in World’s End, the Guardians go to a spa, Captain America feels guilty, and Spider-Verse is building to an awesome conclusion! Bob asks: “?”

All this, and a Comic Con update! Face front, true believers! It’s Hold 322!