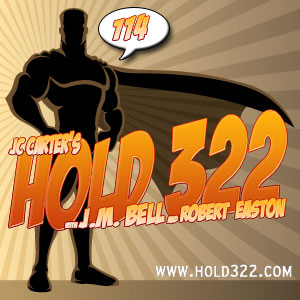 This week on Hold 322! We took a week off to get caught up on our comics and give Jeff time to make art for our upcoming events. Meanwhile, is Marvel ditching print to go digital? Avengers: Age of Ultron is amping up… way up! Marvel tries another fake out and minorly succeeds. Is Andrew Garfield a hero or a villain? The BBC has put together an all-star 4-part documentary just for us! And Constantine gets a supporting cast! This week in comics Dark Horse officially announces the end of the Star Wars line, Star Trek explores that strange bald dude from Into Darkness, Gail Simone chokes on an ending, Batman doesn’t go according to plan, Deadpool ties off 2 years worth of plot threads, more from the Blue Marvel, and Hawkguy dreams in cartoons!

All this and the first round of the Tournament of Heroes! Face front, true believers! It’s Hold 322!