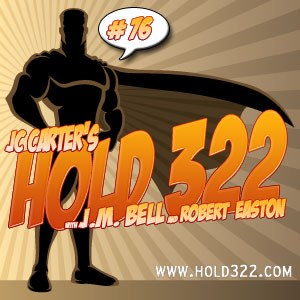 This week on Hold 322 – as we remember the true heroes in Boston this past week, we look on with lackluster enthusiasm at two of DC’s offerings in the hold this week, putting both Batwoman and Nightwing on the chopping block. Still, Justice League was great, but with so many disappointments in this series will this new arc end as badly as the previous arcs? (survey sez: YES!) We get the requisite “shocking” issue in Age of Ultron, Otto discovers the little Peter hiding in his head in Superior Spider-Man, and the tumor in Carol’s head is leading into a crossover with Avengers Assemble. Doctor Who: Prisoners of Time brings us the 4th Doctor and captures the whimsy, tone and artistic style of his comics perfectly.

All this and Bob’s Question of the Week! Face front, true believers! It’s Hold 322!