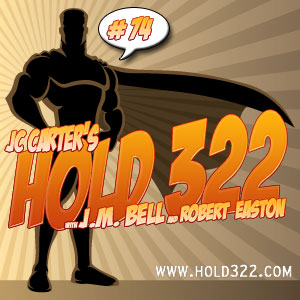 The World's Greatest Comic Book Podcast
Issue #74 - Hold 322 - Back Like a Heart Attack!

This week on Hold 322! We’re back! Like a Heart Attack! And we have THREE weeks of comics to talk about! Although, not that all that much happened (especially in Justice League of America #2). There was Constantine… Otto gets the attention of the Avengers in Superior Spider-Man… Guardians of the Galaxy starts its epic… and Deadpool has a retro issue, drinking with Tony Stark! In other news, Bruce Timm steps down as DC’s animation producer, Zoe Saldana might just play Gamora in Guardians, and we mourn the passing of two legends. Bob’s back with a sparkling new Question of the Week. We countdown the days to Iron Man 3, Star Trek 2, Wolverine 2, And Superman 6!

All this, and an Age of Ultron update! Face front, true believers! It’s Hold 322!